Action 5's On the Beat Reporter

It wasn’t so much that Chuck wasn’t happy reporting on events about town for the local broadcast news. He loved a good fluff piece as much as any of the four and a half thousand other residents of Terra Lake, IN, but like any reporter worth their salt, he always had his nose to the ground for a good story.

When Chuck heard the rumor that his friend and former mentor, Edgar Michael Herman, had been in a relationship with one of his high school students, he didn’t want to believe it. Kids talk and this kind of talk could lead to some serious trouble. He owed it to his friend to find out the truth. Chuck spent a day mulling over how to proceed with the rumor and had finally decided on asking Mike about it; they were friends, after all, and due to Chuck’s experience as a reporter, he normally wound up being direct. He’d talk to him the next day and ask then after a good night’s sleep.

But that was the night that the strange red lights came zipping through town. And nothing was the same.

When Chuck ran into Mike in town the following day he seemed weird. Not just an I-suspect-you-slept-with-a-minor-weird, but a weird-weird. As soon as Mike came into view, Chuck felt a shiver run through him as every hair follicle on his body contracted to tell him: something is wrong. Had he been a first year journalism student about to ask a hard hitting question of a famous stranger he might have thought this was all nerves, but Chuck knew something was off. Giving a friendly wave, Chuck strained a smile as the odd, cold feeling sank deeper into his gut and he decided to abandon his line of questioning. Mike passed by and as soon as he was out of sight, the cold feeling left, but not the knowledge that Mike, somehow, wasn’t the Mike he knew anymore.

It was time to investigate now… not for Action News 5, but for himself and the rest of Terra Lake. 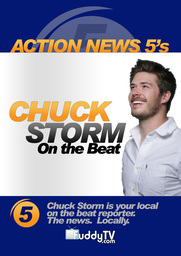